Age is no barrier for Robert

Posted on September 16, 2021 by atWork Australia in Client success stories

Robert, 64, from the Gold Coast (QLD) worked his entire working life as a concreter which contributed to numerous health issues and made it impossible for him to continue working in this field. While Robert’s skills and knowledge in the area of concreting were impressive, they were also limited to this field.

Robert contacted atWork Australia in Oxenford and asked for assistance with his career change. Here, he met his Job Coach Reuben. When both met, Robert was 63 years old and his motivation to find a job was low as he did not think that anyone would want to hire him, given his age.

Robert also mentioned that he struggled day-to-day with money and found it difficult to get by. He said: “I have been struggling with not working or having an income; hard enough to pay rent and bills and I can’t even afford a takeaway meal every now and then. I would love to have KFC every now and then.”

Reuben realised that with no qualifications outside of concreting trade certifications, Robert needed to be upskilled. Robert has tried to work in different labouring positions but could not continue with this type of work due to living with a health condition.

Reuben worked with Robert on building his confidence and showing him that he still had potential. He encouraged Robert to think about work and what they could do to work together to obtain employment.

Reuben worked together with the local Employer Engagement Consultant, Tracey, who suggested a role in Traffic Management. Reuben identified this job as being a great fit and Robert was interested in undertaking the requested upskilling.

Robert was so excited and pleased that he was able to secure this job, and thanked Reuben for all his support. atWork Australia also supported Robert with all his gear to help him get started in the job. Robert has mentioned numerous times that he has been enjoying the role and thanked the Job Coach for assisting.

Robert has talked about how happy he is that he now has money to pay his bills and is not struggling day-to-day.

Reuben says: “I got a lot of satisfaction from helping Robert; taking him from not being motivated to having the belief that there is still work out there for him.”

When Reuben asked Robert if he recently had KFC, Robert responded laughing: “Yeah, I am happy. I have had KFC, fish and chips, and too many take away meals.”

atWork Australia helps thousands of people just like Robert every year to find their way into meaningful work and life, let us help you too. Call us today on 1300 192 632  or enquire online contactDES@atworkaustralia.com.au

Phillip’s green thumb lands him a dream job in gardening

Pouring a schooner of hope through meaningful employment 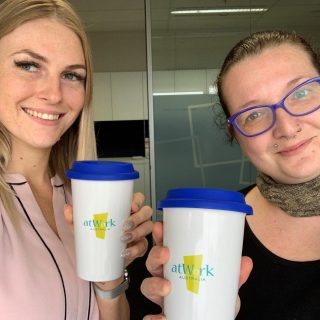 Ethel finds her calling, helping others in Education