Posted on October 15, 2019 by atWork Australia in Client success stories

Darren is set to fulfil his dream of a honeymoon with his new wife now that he’s regained his confidence and found full-time work.

The 27-year-old from Moe in Victoria approached atWork Australia for support after being unemployed for nearly a year. Darren felt a learning disability was affecting his prospects in the workforce, leading to low self-esteem.

“He was struggling to complete online applications and had no résumé at our first meeting,” she said.

“Nevertheless, I was confident we’d find the perfect employer for him,” she said.

Teagan and Darren spent time crafting a positive résumé, listing his many skills and experience in the workforce. When he saw everything neatly set out on the page, Darren was struck by just how impressive his working life was when professionally displayed.

Just two weeks later, Teagan contacted a local employer who was keen to interview Darren for an assistant fitter/assembler role. Impressed with his performance, the specialist tyre systems company, AIR CTI, offered to trial him for a day. By close of business Darren had a permanent full-time job.

He was shocked that he actually got the job.

“I’d like to thank Teagan so much for believing in me, I’m so lucky she was there to help me,” he said.

Teagan said since starting full-time work, Darren had come along “in leaps and bounds”.

“His confidence has skyrocketed and he has thanked me so many times for actually believing in him,” she said.

Darren’s is just one success story among many who have trusted in atWork Australia to help them find meaningful, fulfilling work. Let us help you too. Call us today on 1300 080 856 or enquire online. 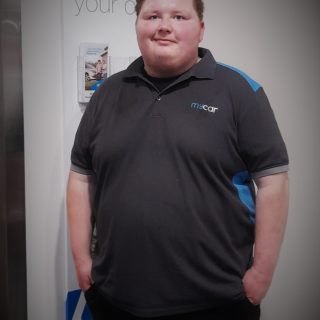 Asperger’s Syndrome is no barrier to employment for Byron

William celebrates his success, as our 15,000th jobactive placement