Hayden rebuilds himself through his new job

Posted on February 06, 2019 by atWork Australia in Client success stories

Twenty-two year-old Hayden came to atWork Australia’s Campbelltown office looking for work in late 2018. Hayden lives with depression, ADHD and acute physical limitations due to a spinal disorder, resulting in him being out of work for around four months.

Due to his mental health at the time, Hayden had convinced himself that he wouldn’t be capable of working. He also felt that he would be “too much work” for an employer to take on, due to his barriers to employment. He was also concerned with the two years that he had been unemployed, thinking that this gap on his resumé would limit his options further. “I was out of work for such a long period, I was losing hope that I would ever be able to work again or that someone would want to hire me,” Hayden said.

Hayden met his Disability Employment Services Job Coach Mohammed and together they updated Hayden’s resumé. He was then put forward for a couple of jobs with McDonald’s, within his first week of joining atWork Australia. To help prepare Hayden for his interviews, Mohammed and Hayden conducted mock interviews together, and atWork Australia supported Hayden financially so that he could purchase new clothing for his interviews.

The good news is that Hayden was offered a role as a Crew Member with McDonald’s. Within nine weeks, Hayden had gone from thinking he was unemployable to being offered a job! The role involves a huge amount of customer service, something that Hayden is very good at and this shone through in his interview with McDonald’s.

Hayden accepted the role and cannot believe how quickly things have turned around. “From start to end I am grateful to atWork Australia. It was an awesome experience. They not only assisted me to get prepared for my employment but also helped me to regain my self-confidence and self-reliance,” Hayden said.

Mohammed is very impressed with the transformation he has seen within Hayden and was very happy to have been able to help Hayden to secure a job so quickly. “Hayden was just in disbelief when I told him he had been offered the job. He said that at last his dream has come true and he expressed his gratefulness. He said that he had never received this kind of help before, and the way it all happened so quickly is just great,” Mohammed said.

Hayden’s new manager at McDonald’s, Sarah, is also extremely happy with Hayden’s performance to date. “Hayden has been a delight to work with. He has adapted well to the fast-paced environment and he has shown some great work ethics. He is a committed crew member and has demonstrated his great ability,” Sarah said.

A wonderful story of transformation for young Hayden who now has a clear plan and path for his career. Hayden’s life has truly been turned around thanks to his new job.

Our Job Coaches provide a tailored service to each and every one of our clients, helping them to rebuild their confidence and self-belief, and focus on their abilities. We’re with our clients every step of the way to finding good, lasting work – Call us on 1300 080 856 or enquire online today to get started. 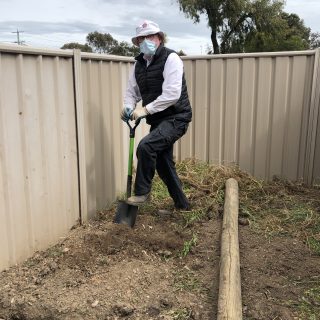 Ben finds his ideal job digging in the dirt

From devastation to determination. Providing hope and jobs for clients and a whole community

Christine proves that Life is what you Bake it

Ahmed’s new job makes him feel like he can fly!

Jose “lifts” his qualifications to increase his employability

Learning more about the jobactive program is easy with us. Tell us a little bit about yourself via the form below and we’ll call you to get you started on your journey to finding the right job for you.