Posted on April 28, 2020 by atWork Australia in Client success stories

Thanks to atWork Australia, Mark is upskilling himself to start a career in care.

52-year-old Mark, from the Gold Coast, had over a decade’s experience as a tiler, until a back injury made tiling work impossible.

Due to this, Mark fell out of employment and relocated to remote bushland in New South Wales. Mark picked up odd jobs around his new home until he further aggravated his back injury.

This was a dark time for Mark, he was trying to recover from a bad injury and down about being unemployed.

Mark felt that his dog was his only support, this was until he met atWork Australia. When Mark joined the Casino Office of atWork Australia, he was connected with his dedicated Disability Employment Job Coach, Simon.

Simon saw the potential in Mark and encouraged Mark to believe in himself and get back into the workforce, in the right role.

With Simon’s support, Mark grew in confidence and health. Mark declared he was ready to get back into the workforce and applied for a labouring role. Simon helped Mark gain required medical clearance and protective gear for the role. Not long after, Mark was successful and back on the tools.

After some time, as much as Mark wanted the job, he identified his limits and regretfully, was forced to leave the position.

Not long after, the Australian bushfires in the summer of 2019 forced Mark to evacuate his home.

Mark moved in with his family, who were not in a bushfire region. His sister encouraged Mark to try out aged care, saying she thinks he would be a great match for a caring role.

When the bushfire threat had passed, Mark returned to the area with renewed commitment to retraining and told Simon he had identified the Aged Care Industry as his future career.

Simon shared in Mark’s excitement for this new role and found a suitable course for Mark’s preferred way of learning and assisted with enrolment in the course. Mark said, “If I need to become I student, I will become a student”.

Mark was elated to start the course and open a new chapter in his life. Simon and atWork Australia continue to support Mark with his course, providing a suitable study space, helping by printing out all course work and paying for the course and first aid training.

“I am pleased to be actively learning new skills,” says Mark.

Take the first step to get where you want to be. Call atWork Australia on 1300 080 856 or fill out an online enquiry today.

The journey to independence for Thomas

atWork Australia helps Wesley find the perfect role for her 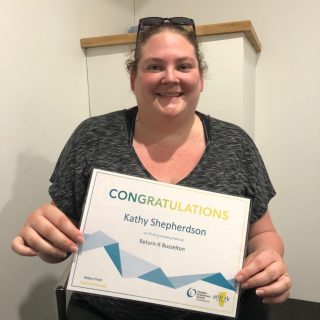